The smoky sunsets of late make for an eerie reminder of the fires burning all around the Springs — to the west, up north and in our past. It’s unwelcome déjà vu, but it seems all but inevitable each summer.

Colorado is hot, dry and windy during the summer, making it fertile ground for ravaging fires. But research suggests this recent uptick may be attributable to insect outbreaks, drought and rising temperatures — all symptoms of manmade climate change. Innovators not resigned to that fate have found an unlikely tool for both surviving wildfires and preventing them at the same time: cannabis. (But not the kind that gets you high.)

“You can’t roll up a doobie with what I build with, that’s for sure,” says John Patterson. “But it is a natural flame retardant!” 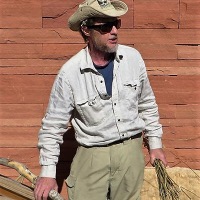 Patterson, a carpenter-turned-hempster, teaches classes on home-building with hemp in Fort Collins. Hempcrete — a mixture of hemp stalk, water and lime — could pave the way toward a sustainable future when we don’t get wiped out by climate change, he says, rattling off the material’s key eco-friendly properties: It’s naturally temperature regulating; biodegradable;    lightweight; antibacterial; antimicrobial; and it’s a carbon sequester (meaning it absorbs CO2 from the atmosphere rather than letting it keep warming the planet).

The thing is, of course, the material is hardly mainstream in the American building industry. Growing it became federally legal just two years ago under the U.S Agriculture Act of 2014 in states that permit it, which Colorado started to do a year earlier.

Industrial hemp production is on the up, but growers have since focused mainly on medicinal, nutritional and fibrous uses of the plant. Hemp grown for its seeds or the oil you can press from them tend to be shorter and bushier, without much regard for the stalk. But in the core of that stalk is stringy plant matter that can be processed into hempcrete — a value-added product for farmers trying to get the most out of their harvest.

“In Europe they’ve got it down perfectly,” Patterson says. “They’re miles ahead of us. We’re just getting started with it here in the U.S., with Colorado at the forefront.”