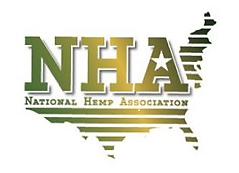 A leader in hemp industry advocacy, the NHA will celebrate its signature milestone with key supporters of new hemp legislation, The Industrial Hemp Farming Act of 2017, to be introduced by Congressman Comer in the current 115th Congress and supported by long standing Congressional advocates for hemp as an agricultural crop and economic driver.

NHA will present its petition and signatures at the annual ‘Hemp on the Hill Expo and Conversation’ to be held in Washington, DC on February 28th. The event hosts, and supporters of new hemp industry legislation are Congressman Polis, Congressman Massie, Congressman Comer, Congressman Blumenauer and Senator Wyden.

Congressional leaders are being asked to utilize the signatures in further support of efforts to remove hemp from Schedule I classification and promote hemp as a viable agricultural crop that will help to revitalize farming communities, and promote new economic growth through its many industrial uses and products.

NHA is an industry leader in creating the framework for states to grow industrial hemp for research purposes and commercial cultivation by spearheading the addition of Section 7606, an amendment to the 2014 Farm Bill. Introduced by Congressman Polis, the amendment gained bi-partisan support and passage in both the House and Senate.

The NHA is one of several advocacy groups seeking support for favorable federal hemp legislation through petition and signature drives. And will continue to support efforts to reach this common goal.

Currently, the United States consumes 90% of world’s hemp but to date has limited cultivation and processing of the valuable crop. It remains the only G7 nation that prohibits full acceptance and cultivation of hemp under federal law.

Micah Nelson, like his father ‪Willie Nelson, is a singer-songwriter and artist with a passion for the environment, the family farm, and building a socially just 21st century economy. He sees the opportunities industrial hemp creates for farmers and looks forward to using his music and artistic talent as a platform to voice and bring awareness to an end to its prohibition.

“Our organization is pleased to be leading this movement, bringing a much-needed opportunity to our rural landscape and American agriculture. Hemp cultivation can and will help to revitalize our rural communities and economy, create new jobs, and let American farmers and entrepreneurs do what they do best – innovate” commented Michael Bowman, Board Chair of the NHA.

What: Hemp On The Hill Expo and Conversation
eventbrite.com tickets-30895380916