Industrial hemp is big in Europe, where there’s been widespread adoption of sustainable, green materials in manufacturing. This startup is trying to grow a business and a new U.S. industry.

Kentucky’s foray into industrial hemp has fueled a Louisville startup which is betting that natural fibers someday will become a key ingredient in hundreds of American-made products –  furnace filters, kayaks, skis, even coffee mugs. 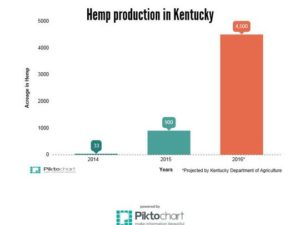 was launched by Oldham County native Trey Riddle in summer 2014 after the state of Kentucky’s successful push to sanction hemp production.

The company contracts with Kentucky farmers to grow hemp and a cousin crop called kenaf. It’s also developed a way to process and coat natural fibers. They are then sold to “upstream” buyers who make pellets for other manufacturers as a drop-in replacement or substitute for more expensive, energy-intensive plastics and glass fibers. Their fibers currently are undergoing trials for creating furnace filters and filaments for 3D printing.

While U.S. manufacturers are still experimenting with such biomaterials, in Europe, the industry is booming. Hemp is used in everything from cigarette paper to auto manufacturing and insulation.

Growing hemp in the U.S. without a permit was prohibited nearly a half century ago because it was classified as a controlled substance related to marijuana. Both plants are the same species, Cannabis sativa, but hemp has a tiny amount of THC, the compound that gives pot users a high.