A View Of The Future Of Hemp Plastic

Plastic is the world’s most adaptable material. From bikes to food wraps and from jets to pencils, you can make anything and everything from plastics.

With an infinite number of uses, plastic also has some devastating impacts on our planet. Most plastics produced today are made using petroleum-based compounds that release harmful gases into the atmosphere.

Waste solutions are inefficient, and harmful by-products toxic to land, water, and wildlife. However, the good news is that there is an alternative that does not contribute to the greenhouse effect, is sustainable and biodegradable, and comes with just about an indistinguishable cost to present techniques.

Hemp plastic; the only plastic that’s 100% biodegradable in nature and is produced from the Hemp plant which consumes 4 times more carbon dioxide than other plants from the atmosphere.

The fiber produced from hemp is stronger than the conventional fiber that is mostly available. This article is intended to show numerous benefits of using hemp for the manufacturing of biodegradable plastic (HEMP PLASTIC) rather than conventional plastics.

A Bit Of History

Historically, the hemp plant has been used globally for thousands of years to make a variety of supplies, everything from clothes to paper to building materials. It was even a staple crop at the initial root of American culture since the sturdy fibers of the plant were incredibly valuable for making a variety of products.

With the passing of the Marijuana Tax Act in 1937, and then the even more restrictive Controlled Substances Act in 1970, it became a lot more difficult to grow hemp.

In December of 2018, the Agriculture Improvement Act was signed into law, meaning that hemp was no longer a controlled substance. Now that it is easier to grow and sell hemp-based products, a door has opened for hemp plastic to emerge on the market.

Recent technology has practically opened the door to a new type of eco-friendly polymer, one that’s no longer reliant on petroleum, but on cellulose. Bioplastic is renewable, sustainable, and sometimes cheap because it’s made out of agricultural waste. Hemp is a great source of cellulose, and hemp plastic could change our planet.

From seed to flower, every part of the hemp plant can be used. Hemp is a type of cannabis Sativa that’s used in industrial settings. Industrial hemp contains less than 0.3% of THC, the psychoactive compound of marijuana, so it’s legal to cultivate it in every country of the European Union.

But the most important aspect of the hemp plant is probably its versatility. Hemp is a multi-purpose crop, and every part of it can be used in various ways. For instance, the fiber is commonly used for the production of lightweight paper, insulation material, and biocomposites.

Hemp shivs- the woody inner cores of the stems- are used for animal bedding and construction. Hemp seeds are very nutritious as well and can be consumed raw or press them into hemp seed oil.

Biodegradable plastics are produced using petro-chemicals just like conventional plastics except some additives are included in their manufacturing which helps them in their fast degradation. Biodegradable plastics don’t always break down into harmless substances, sometimes they leave behind a toxic residue and that makes them generally (but not always) unsuitable for composting.

They can be broken down by microorganisms into water, carbon dioxide, and some biochemicals. And when they are put into the landfills, they produce harmful greenhouse gases when decomposing, which makes them more toxic than the other conventional plastics. Some examples of biodegradable plastics are polybutyrate (PBAT), polycaprolactone (PCL), polylactic acid (PLA), and polyhydroxyalkanoate (PHA).

Hemp plastics might be popular nowadays, but the truth is that they have been around nearly as long as plastic itself. In fact, Henry Ford of the Ford automobile brand was so impressed by the quality of hemp plastic, so he designed a car that used hemp plastic for various components back in 1941.

Hemp is easy to cultivate and it contains high cellulose concentration (up to 70 percent).

In addition, recent developments in the plastic industry has seen the manufacture of hemp-plastic resin known as hempstone in Australia. It can be applied in manufacturing loudspeakers, musical instruments as well as furniture. Hempstone can be carved in a variety of shapes making application unlimited. 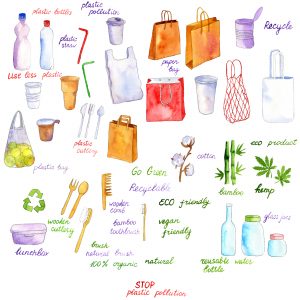 One of the problems with petroleum-based plastics is that they are extremely resilient. Since only a small portion of plastic is actually recycled, most of it ends up in landfills.

Common plastics can take thousands of years to break down, but there is no exact figure for the amount of time it takes plastics to decompose. And to make matters worse, the byproducts of their degrading can be toxic to the environment.

Meanwhile, hemp plastic is completely biodegradable. It takes around six months for hemp plastic to decompose, and its byproducts are not toxic to the environment. In the right conditions, hemp plastic can break down in as little as two or three months.

So even if one does not recycle hemp plastic, it would still break down into its basic components which makes hemp plastic biodegradable and would not create mountains of garbage in landfills.

Hemp Plastic Is Not Toxic To Humans Or Animals

Hemp plastic is not toxic, unlike the petroleum-based plastics that contain substances that act as endocrine disruptors. Knowing about the endocrine system and how easy it is for some substances to disturb its fragile balance, this makes conventional plastic all the more dangerous.

Conventional plastics contain substances called bisphenol A, polybrominated diphenyl ethers, and phthalates. These substances interfere with the human and animal endocrine system which results in birth defects and learning disabilities among others.

Hemp Plastic Is Strong and Versatile

Plastic made out of hemp is up to three and a half times stronger than polypropylene, one of the most common types of petroleum-based plastic, and hemp plastic is also lighter. Some of the major production industries have started relying on hemp plastics for making toys, electronics, and car parts amongst others.

It Helps the Environment

Hemp is beneficial for the environment in many ways such as the fact that the crop prevents soil erosion, thereby reducing water pollution and maintaining soil quality. It also absorbs carbon dioxide from the environment and reduces the greenhouse effect.

Hemp plastic is clearly an amazing alternative to conventional plastic. Plastic made out of hemp is strong, durable, and lightweight, so it would prove useful in a lot of industries. It is believed that biodegradable plastics will play an important part in the future, and this is likely true.

Slowly, but surely, bioplastics will become part of our lives. With an ever-increasing number of plastics being utilized by and expanding the weight being set on limits accessible for plastic wastes disposal, the need for biodegradable plastics and biodegradation of plastic wastes has gained increasing importance in the last few years.

Also, the available sources of petroleum oil are declining (which is the major source of conventional plastics) adds up to the need for an alternative way of creating plastics. In any case, countries all through the world do understand that petrochemical utilization should be lessened, and hemp is being perceived as a reasonable contrasting option to these plastics. But while they are still being used, it is essential to put the adequate processing solutions in place to mitigate the effect of conventional plastic.

Although producing plastics using only hemp plants costs more efforts and money, the impacts that conventional and other bioplastics are having on the earth makes it a little price to pay in order to improve the state of the earth.