Based in D.C., the National Hemp Association (NHA) is a non-profit with a mission to support the growth and development of the hemp industry. NHA became a member of the Cool Farm Alliance late last year with the aim of leveraging the partnership to create a united front to support regenerative agriculture, freshwater conservation, biodiversity, and best practices for land management through the Cool Farm Tool.

Anna Chanthavongseng, Assistant Executive Director of the National Hemp Association discusses the association’s ambitions and how the Cool Farm Alliance will be beneficial. 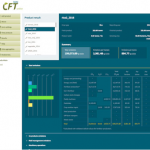 The Rise of Environmental Sustainability Tools and Services

Human-induced climate change and its consequences are the big problems of our time, touching on almost every sector. In agriculture, erratic weather conditions leading to food insecurity and supply chain issues create global panic for farmers, businesses, and consumers. As farming becomes more susceptible to the effects of climate change, technology is trying to aid predictability and recognize patterns.

The Cool Farm Alliance is one of such organizations that is developing technology to enable millions of growers globally to make more informed on-farm decisions that reduce their environmental impact. Their tool, Cool Farm Tool, is a multi-faceted calculator that allows farmers to type in fertilizer input, track carbon emission and sequestration, and water usage. There are three types of calculators that support tracking and accountability, and they are: Greenhouse Gas Emissions, Biodiversity, and Water Metrics. Each calculator contributes and curates the user’s information, making it multidimensional and user-friendly. Users can use this data to compare yields from the previous year and make estimates for the future based on the data available. Its communal effort has a strong interpersonal and egalitarian responsibility that helps users capture quantifiable data to share with the community. The community can then extrapolate this data and use it any way they please i.e., research or sustainability reports.

How and why is this beneficial to hemp farmers and the industry as a whole?

Hemp has a rich history in the United States. Grown and harvested for textiles and cordage, hemp played an integral role in American History. Puritans in Jamestown grew hemp in contract with the Virginia Company in 1607 and in 1635 the first American hemp rope manufacturing facility was built in Salem, Massachusetts. Founding Fathers like George Washington and Thomas Jefferson supported hemp and grew it. Jefferson received the first US Patent for his hemp-break to easily break down hemp fibers in the nineteenth century.

However, the American hemp industry went through a series of highs and lows between 1937 and 2014 before the Agricultural Act of that year that made it either uneconomical to farm or prohibited by law.

In the Agricultural Act of 2014, a hemp pilot program was established for research. Farmers were able to cultivate hemp on US soil again without repercussions, but with limitations and regulations. Research can only be conducted by higher education or the state’s department of agriculture. Hemp was differentiated from marijuana by the percentage of delta-9 tetrahydrocannabinol, 0.3%, on a dry weight basis. In the Agricultural Act of 2018, hemp cultivation was federally legal nationwide for not only for research purposes but now commercial.

Now that hemp is seen as an agriculture crop and commodity, it is now eligible for agricultural grants. Organizations, higher education institutions, and private companies have taken the opportunity to use hemp to its full potential and explore its industrial uses which include the cellulose-rich stalks and deep roots that can penetrate and break up soil and absorb toxins.

Because of minimal data due to the hardships hemp had to endure in the past, the industry is playing catch up on hemp research. The Cool Farm Tool is free for farmers to use, especially for tracking farming methodologies, fertilizer input, fossil fuel consumption used in transportation and equipment, and much more. Hemp farmers can use this calculator to experiment on how they can create a better land management system by using regenerative farming practices such as minimal or no till, natural soil amendments such as biochar or fungi additive or worm castings and track their yield year after year. And even better, share their experience and data with other users, making it a collective and collaborative experience.

Users, that can be farmers, universities, NGOs, public and private companies can use this data to make better decisions on how they can use raw materials responsibly.

A resource like the Cool Farm Tool will help us at the National Hemp Association to understand how to support better land management, improve yields, conserve freshwater, and reserve the soil’s organic carbon stock in black soil, while sharing data of how we are doing it and tracking it. In a world where blockchain is being implemented and adopted in agribusiness, a tool like the Cool Farm Tool will help support the traceability and trackability model. Promoting and using this calculator will help the industrial hemp industry gather data from the United States, data which we need due to the 80-year prohibition of cultivating the crop. We look forward to working with the Cool Farm Alliance and promoting data sharing and analytics.