Regulating Heavy Metals in Cannabis: What Can be Learned from the Pharmaceutical Industry? Part 2

The first installment of this series gave an overview of why testing cannabis and hemp for heavy metal contaminants is so important and how the pharmaceutical industry can play a critical role in preparing the cannabis industry for federal oversight.

Parts two and three will focus on how growers, cultivator, processers, and manufacturers need to be actively investigating all the potential sources of elemental contamination before they can even hope to minimize them – a process the pharmaceutical industry took over 20 years to fully understand.

The series has been summarized from two chapters in Robert Thomas’ upcoming book, Measuring Heavy Metal Contaminants in Cannabis and Hemp: A Practical Guide, which will be published by CRC Press this September. The book, including its table of contents, is now available for pre-ordering from the publisher.

Cannabis and hemp are known to be hyper-accumulators of contaminants in the soil, which is why they’ve been used to clean up toxic waste sites where other kinds of remediation attempts have failed. In the aftermath of the Chernobyl nuclear melt down in the Ukraine in 1986, industrial hemp was planted to clean up the radioactive isotopes that had leaked into the soil and ground waters1. Of course, Chernobyl is an extreme example of heavy metal and radionuclide contamination. But as a result of several anthropogenic industrial activities over the past few decades, including mining, smelting, use of fertilizers and pesticides, and waste treatment, heavy metal pollution has become one of the most serious environmental problems today.

Considerations about where to grow cannabis and hemp is therefore going to be critically important because it could have serious implications on the level of heavy metals that are absorbed by the plant and its resulting safety for human consumption of cannabinoids. Historically, apart from the Western and Southern regions of the US, much of the cannabis in the US has been grown indoors in greenhouses under controlled growing environments, so the absorption of heavy metals into the plant has been kept in check reasonably well.

But in 2020, it’s legal to grow hemp for CBD production anywhere in the US. As a result, it will become more challenging to keep the levels low, because most of the hemp plants will be grown outdoors on farms where the soil might be an additional source of contamination. Part two of this series of articles will look at potential sources of elemental contaminants in cannabis and hemp, from a growing and cultivation perspective, while part three will focus on the extraction, manufacturing and packaging processes.

Phytoremediation properties of cannabis and hemp 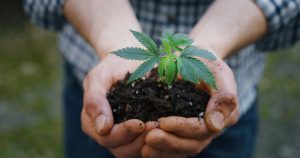 Plant-based phytoremediation is emerging as a cost-effective technology to concentrate and remove elements, compounds and pollutants from the environment. And within this field, the use of cannabis and hemp plants to concentrate metals from the soil into the harvestable parts of roots and above-ground shoots (phytoextraction) has great potential as a viable alternative to traditional contaminated land remediation methods. However, the natural inclination of these plants to absorb heavy metals from the soil could potentially limits its commercial use for the production of medicinal cannabinoid-based compounds. A number of studies provide convincing evidence that cannabis is an active accumulator of heavy metals such as lead, cadmium, arsenic, mercury, magnesium, copper, chromium, nickel, manganese, and cobalt.

Other pathways for contamination

An added complication is that cannabis and hemp plants not only absorb heavy metals from the soil and growing medium, but also from contaminants found in fertilizers, nutrients, pesticides, and growth enhancers, as well as from other environmental pathways. Additionally, the process of cutting, grinding and preparing the cannabis/hemp flowers for extraction can often pick up elemental contaminants from the manufacturing equipment.

It should also be emphasized that the extraction/concentration process has the potential to extract/concentrate varying amounts of heavy metals, depending on the solvents and the super/sub critical extraction temperatures/pressures used. It’s therefore critically important that an optimized extraction/concentration process is carried out in order to minimize the carry-over of heavy metals, even though it might not maximize cannabinoid yield. It’s also worth pointing out that the equipment used to package and deliver these cannabinoid products to consumers, such as inhalers, vaporizers, transdermal patches, bottles and containers can mean the user is exposed to additional sources of elemental contaminants, apart from what’s in the cannabinoid compound itself.

Main factors for metal uptake from the growing medium

The health and growth of all plants rely on the absorption of essential nutrients and minerals being available in the dissolved, ionic form in the soil. To maintain enough water to survive and thrive, the plant’s primary means of facilitating the movement of water is through transpiration, which is a highly efficient means of drawing a concentrat­ed solution of minerals and nutrients out of the soil. Transpi­ration works by the evaporative loss of water from the shoots, which is controlled by the opening and closing of specialized pores (known as stoma­ta) embedded in the surface of the leaves that initiates gas exchange. When the stomata are open, the pressure potential of the plant becomes very negative, creat­ing a vacuum effect that draws water and nutrients into the plant, moving it from the roots to the shoots. Unfortunately, this is also the mechanism that the plant draws in heavy metal contaminants in addition to the nutrients.

The rhizosphere is the region of soil in the vicinity of plant roots in which the chemistry and microbiology is influenced by their growth, respiration, and nutrient exchange. Unfortunately, under certain conditions the plant’s root system will preferentially absorb heavy metals over other minerals, which cannot be explained exclusively by passive ion uptake. The hyper-accumulating properties of cannabis and hemp aren’t fully understood, but are partially dependent upon other factors, including soil pH, availability of other metal/mineral ions in solution, the N/P/K (nitrogen/phosphorus/potassium) ratio and the ability of the plant’s natural metalloproteins, which act as chelating compounds to bind with the heavy metals to reduce the rate of absorption and overcome their toxic effects.

It should also be noted that the plant’s natural polyamine compounds will strengthen the defense response of plants and enhance their defense against diverse environmental stressors including toxicity, and oxidative stress. Bode wrote an excellent article on the underlying mechanisms of heavy metal uptake by cannabis plants, which should be essential reading for the cannabis grower.

Based on evidence in the public domain, there are in the order of 15-20 heavy metals found in polluted ecosystems that could be potential sources of contaminants, including Lead, Arsenic, Mercury, Cadmium, Nickel, Vanadium, Cobalt, Copper, Selenium, Boron, Thallium, Barium, Antimony, Silver, Gold, Zinc, Tin, Manganese, Molybdenum, Tungsten, Iron, and Uranium. Many of these elements exist as different species (eg. metalloids), based on their oxidation state, organic/inorganic/ionic form, or more recently as engineered nanoparticles that could find their way into wastewater streams. Their levels of toxicity would need to be investigated further, but there is a compelling case to be made that the many of these elements, metalloids, and speciated forms could be the future basis of a federally-regulated panel of metal-based contaminants in cannabis and hemp.

Let’s take a closer look at some of the ‘real-world’ sources of elemental contaminants that are supported by evidence in the public domain. It’s only when cannabis and hemp cultivators and growers have a good understanding of this problem, can they hope to reduce or even eliminate them. This isn’t an exhaustive list, but it represents a good starting point to begin investigating these issues.

Although an indoor or greenhouse growing environment is far more controlled than cultivating plants outdoors, there are stillmany opportunities for picking up elemental contaminants. Nutrients, fertilizers and potable water are three of the potential sources of metal contamination. As a result, indoors plants cultivated in a soil-based growing medium or hydroponically-grown, are highly dependent on the nutrients, minerals and water used. For that reason high quality fertilizers and a source of clean water are essential for healthy plants. Here are three possible areas of concern when growing plants indoors.

The pharmaceutical industry has shown that the only way to reduce elemental impurities is to fully understand all the potential sources of contamination. It took over 20 years to investigate every facet of drug production, including analyzing the raw materials, and active pharmaceutical ingredients, together with the entire manufacturing and packaging process. The US cannabis industry is currently nowhere near this level of knowledge. This is even more disturbing because our insatiable demand for cannabis products is being fulfilled by other parts of the world. This was exemplified in a couple of recent newspaper editorials. One of them highlighted the gross soil contamination produced my metal refineries in many parts of China. That in itself isn’t surprising, but the other editorial talked about Yunnan Province in southern China, which is now producing CBD-products for the US market. So the US cannabis and hemp industry must begin to find ways to reduce levels of heavy metal contaminants, otherwise consumers will turn away. If cannabinoid products on the market are considered unsafe to use, it might be too late by the time the FDA comes knocking at the door.

Copyright © 2020 From Measuring Heavy Metals Contaminants in Cannabis and Hemp: A Practical Guide by Robert Thomas. Reproduced by permission of Taylor and Francis Group, LLC, a division of Informa plc. FDA comes knocking at the door.