What If We Added Hemp into 5% of Existing Crop Rotation?

The Country’s Most Produced Commodity Crops 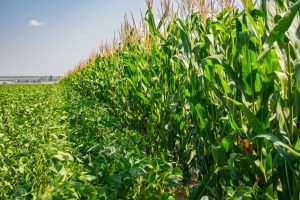 With an abundance of arable agricultural land in the United States, over a dozen of commodity crops are grown for various end-products. From corn to soybeans to wheat, these crops can produce byproducts that can be used for feedstock, animal feed, human consumables, and more.

While corn and soybean decorate rural roads for miles and miles across the nation, how does hemp compare?

New Kid on the Block

After being prohibited from being planted and grown in 1937, but officially banned in 1970 due to the Controlled Substance Act (CSA), industrial hemp was a crop that would be forgotten for several decades. Making a slow comeback with the Agricultural Act of 2014, hemp was back on American soil. Since the full US legalization of hemp cultivation through the Agriculture Improvement Act of 2018, thousands of farmers saw this as an opportunity to improve their soil and capitalize on a new stream of revenue.

Industrial hemp can be grown for fiber, grain, and the most popular, cannabinoids. The cannabinoid sector of the hemp industry has dominated the space but represents about 2% of what the hemp market can be. What if we grew hemp for its industrial and nutritional benefits while using it as a rotation crop for corn and soybeans? How can hemp infiltrate the agricultural space by just adding hemp into 5% of existing crop rotation?

Hemp into 5% of Crop Rotation for Environmental and Economic Benefits 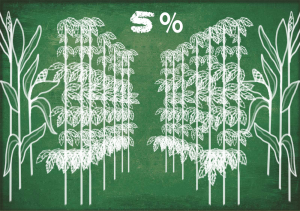 Let’s do some number crunching (it’s ok, we’ll do it for you). With the numbers stated earlier that the combined acreage of corn and soybean equated to 182,000,000 how many acres of hemp would that be if we added hemp into 5% of their rotation? 9,100,000 acres of hemp would contribute to the expansion of specialty and/or commodity crops grown in the US with the 5% addition. How will it impact producers, the planet, and profits?

Producers who are growing other commodity crops can diversify their farms by adding hemp into their rotation. Not only will it possibly provide a new stream of revenue for farmers, but they’re also replenishing their soil. Because hemp is a bioaccumulator due to its deep tap root system, it’s able to absorb herbicides, pesticides, and heavy metals from the soil. Conventional corn and soybean farmers that do not rotate their crops in-between seasons may experience soil erosion due to excessive use of herbicides, like glyphosate, that kills microorganisms in the soil. By planting hemp as a rotation crop, it’ll be able to absorb the chemicals, prevent further erosion, and promote the soil food web.

Rotating crops is beneficial not only to the farmer but to their farmland. Besides diversifying their crop portfolio, they’re promoting soil health which will lead to better yields. With diverse crop rotation, there will be minimal soil erosion, more water conservation, and additional nutrients to their crops; a win-win situation. Hemp’s ability to sequester carbon is an added bonus that can help mitigate and fight climate change. Because C02 can bind with the fibers within the stalk and continue to be sequestered when hemp is turned into byproducts such as paper, textiles, and building materials, it makes hemp a carbon sink. Scientists have stated that growing a hectare of hemp can sequester 22 tons of CO2, a little under 50,000 pounds. With 3,682,639 hectares or 9,100,000 acres of hemp being used as crop rotation that will be a sequestration of 81,018,058 tons of C02 per year. What climate scientists have suggested being under 2° Celsius, the world must remove 10 gigatons of CO2 per year by the year 2050. 1 billion metric tons equates to 1 gigaton. I’m sure your head is spinning right now, but if we calculated the amount of hemp being grown over the course of the next 5 years with just adding hemp into 5% of crop rotation, that will be 405,090,290 tons of C02 being sequestered, just from the United States. These numbers are a bit intimidating, but if we viewed what we can do collectively/globally, it certainly is achievable and actionable. This is more than just a pledge of being under 2° Celsius, but a real solution.

We know adding hemp into the rotation is great for the producers and planet, but what do you do with 9 million acres of hemp that can be grown for fiber and grain and where will it go? 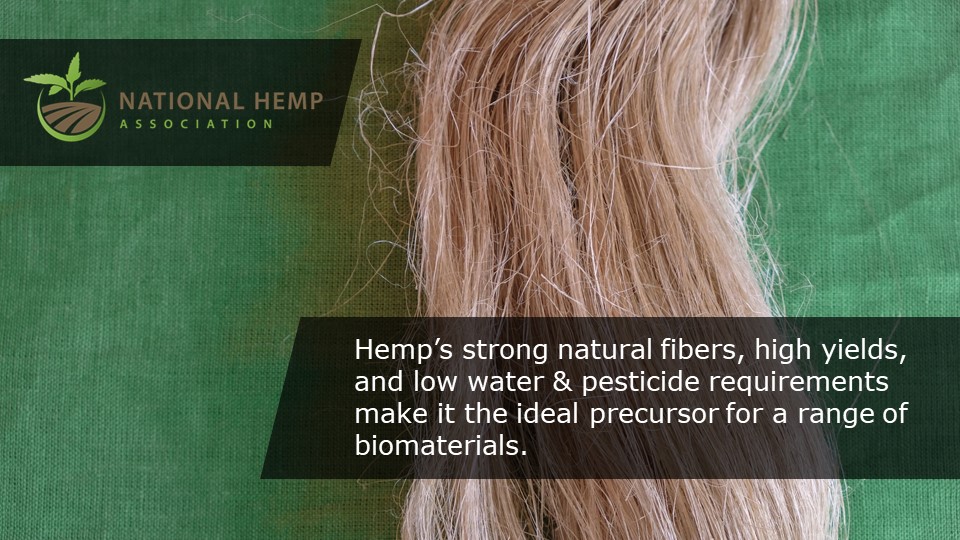 If we were to grow hemp for industrial uses, the bast fiber can be used for textiles, paper, and in nonwoven applications (e.g. fiberglass, automotive interior paneling, sanitary wipes, etc), and the hemp shiv/hurd in construction, animal bedding, and landscaping mulch. Hemp hurd has been used in binders in the natural building industry and hemplime structures can be seen and lived around the world. As families discover and learn about the toxicity of their homes, they’re turning to healthier and better alternatives to live in a clean and healthy home that is well insulated and non-toxic.

There is an innovative and sustainable sector involving nonwovens, particularly with plant fibers such as hemp. The trending and sustainable approach of using nonwovens as a reusable and biodegradable resource has been developed by companies across the globe. Researchers are focusing on biopolymers and blending them with cellulose fibers. Rather than short-term and single-use disposables, they’re shifting towards long-lasting products with minimal impact on the planet. There is a great opportunity for cellulose fibers, including hemp fibers to be a part of the growing nonwoven innovative industry. 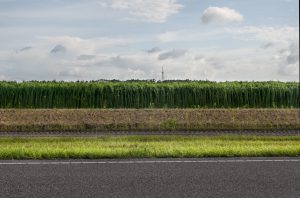 “If hemp can do all of this, why aren’t we doing it this now?” Yes, the million (or billion) dollar question. With decades of research and opportunities missed due to the prohibition, creating the infrastructure the fiber hemp industry needs is going to take time and due diligence. The supply chain for the cannabinoid market is there and existing – from seed to sale, with some grey areas regarding regulation state by state, but there and operating. Unfortunately, we can’t state that when it comes to the fiber market. Fiber hemp grows a bit differently from cannabinoid hemp. Cannabinoid hemp is like growing a horticultural plant where cultivation is quite important, like gardening, whereas fiber hemp is like planting a row crop where heavy machinery is more involved. Fiber hemp can grow as tall as 20 feet, which makes finding equipment to harvest not only a tall crop but a strong one, challenging. Stalks can get caught and twisted in combines if the proper machinery isn’t used. Once cut, the fiber plant will be field retted for the microbial breakdown of the stalk and after decomposition, the stalks are normally round baled, which prevents the stalks from rotting. Once baled, it’s then hauled to a storage facility with hopefully great ventilation (hemp bales, whether wet or dry can be combustible if their internal temperature is above a certain threshold), and then further processed. Machinery to further process hemp is where it gets a bit difficult. The stalk has a few parts to it where those parts can be used in different industry areas. The bast fiber and the shiv would need to be separated to be used in various products. The machine that typically separates the bast from the hurd would be a decorticator. There are multiple small-scale decorticators scattered across the nation that can process one to two tons of hemp per hour. Because these decorticators are scattered, it makes transportation expensive. If we want the US hemp fiber market to succeed, we need commercially scaled decorticators that can process a minimum of five tons of hemp per hour in different regions of the States. After decortication, the soft bast fiber and the hurd can then be further processed for hemp-derived end products. 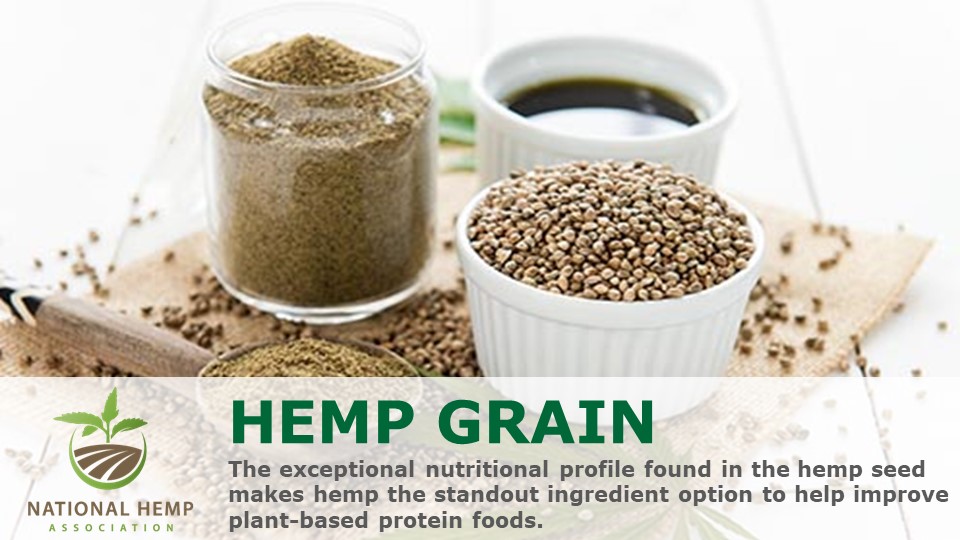 As for the hemp grain market, the seeds can be dehulled and ready to eat, pressed for their oils, and used as a dairy alternative for milk. With hemp being part of the elite title “Superfood” as an ingredient due to its nutritional benefits, hemp is a part of the expansion in the superfoods market. With North America being the largest market for superfoods and the Asia Pacific being the fast-growing, there is the likelihood that hemp can infiltrate the superfoods market with a predicted CAGR of 5.1% in the next 5 years. Citizens around the globe are now eating foods with good health intentions and are wanting and willing to learn more about nutrition and their health. Consumers are shifting their decision-making and adding value in long-term health benefits versus affordable and cheap costs of processed foods.

Adding hemp into 5% of existing crop rotation will not only remediate the soil while sequestering millions of tons of carbon, but it can play a major role in the innovated nonwoven industry and food grain market. Producers, processors and manufacturers can develop infrastructure around the additional 9 million acres and scale hemp commercially where it should be as the next rotation commodity crop.